A journey of aromas and flavors will take place during this season at Minos Beach art with a diverse array of special guests.

In collaboration with our multiple-awarded chef Giannis Baxevanis we invite renowned chefs to get inspired by Cretan cuisine and create together unique culinary experiences for oue guests.

On our opening evening on June 26th, Yiannis Baxevanis and Jerome Serres, awarded 4 times with a Michelin star will prepare a curated selection of Mediterranean meze dishes at Adeste Kafenion.

Contact us to find out more about our upcoming Culinary events.

Jerome Serres was born in Toulouse France, where he completed his studies in École hôtelière de Mazamet and after working in several renowned Paris restaurants next to prominent French chefs, he opened his own award-winning restaurant in Lautrec France. Later, in 2002 he moved to Greece, where he pursued an awe-inspiring professional career, becoming one of only five chefs in Europe who has won three times one Michelin star in less than 5 years. Spondi becomes the first Relais & Chateaux in Greece under his supervision and Pil Poul earns a Michelin star just 4 months after Jerome undertook its kitchen.

Jerome, known for his discipline and French temperament, creates fine and refined cuisine where seasonality is its key ingredient. He loves to use citrus aromas and infusions, along with extra virgin olive oil to create a fusion of Mediterranean flavors. An ardent supporter of “une cuisine franche et pure”, he believes that success in the kitchen lies in the details and the precision of execution.

Repeatedly earning distinctions such as Premier Prix de la Grande Cuisine Européenne, Relais et Chateux honors and much more, Jerome has undeniably marked the mediterranean gastronomic scene of the 21st century with his personal seal. For the past 10 years, he leads successful consulting for famous restaurants in the Middle East, while his innovative cuisine in the iconic Athenian restaurants Spondi, Eridanus and Pil Poul, has determined an entirely new era for many generations of Greek chefs, for whom Jerome always remains the grand master. Jerome proudly states Greece is his second homeland.

Le Pérolles is in line with Pierrot Ayer’s former restaurant. It will delight the regulars of the chef’s cuisine, without confirming them in known flavors.

Indeed, Pierrot Ayer has surrounded himself with a new team of young and inventive cooks. The new restaurant has become a place of learning and transmission between generations, with the love of gastronomy as a guiding light.

The new open and modern space will energize exchanges and flavors and will influence the staging of meals, which will be accompanied by new colors. Tastes change with the décor: new space to invest in means new taste buds to conquer.

Pierrot Ayer promises to remain faithful to his regulars, while having fun surprising them: the objective is to reinvent himself, without betraying himself – without forgetting, in the process, to explore new horizons in order to amaze and win them over without ever tiring them.

Sotiris Evanggelou was born in the town of Tyrnavos, a place filled with gastronomic treasures. With a unique and charismatic sense of taste, talent in execution and an impeccable work ethic, he managed to turn his teenage dream into a successful career!

Over the course of almost four decades in the industry, he has developed a unique and characteristic culinary style. His mentality and personality call for trust and respect, leaving an important imprint to the generations to come. He is a distinguished chef with a long career path in the world of gastronomy and hospitality, who studied at the culinary school of Alain Ducasse in Paris. He was chosen to work at Ducasse’s restaurants all over the world; in Monaco, in Marseille and Provence and his career really took off with his cooperation with the Plaza D’ Athénée in Paris.

Coming back to Greece, at the age of 28 years old, he became the youngest executive chef at Makedonia Palace in Thessaloniki and since then he has lead the kitchens of renowned hotels such as the Athenaeum, the InterContinental, the King George, the Grand Bretagne and last but not least, his starting point, the Makedonia Palace.

Manolis Papoutsakis was born and raised in Kissamos, Chania. In the army he received his basic training as a cook and from then on he realized and decided that cooking would become his profession, and philosophy his hobby. He was in Thessaloniki for his doctoral dissertation in Plato, but at the same time, he continued to build his culinary career. As a cook he grew up  in the kitchen of the Cretan restaurant “Myrsini” and after passing through the kitchens of other restaurants, in 2017 he decided to open his own Cretan restaurant, “Charoupi”, of which he is also the chef.

The restaurant has already been distinguished and awarded many times (Athinorama, Golden Hats, FNL) while it has given a new dynamic of renewal to the traditional Cretan cuisine. At the same time he is the chef and co-owner of the modern tavern Ten Tables in Thessaloniki. He is a regular member of the Chefs Club of Crete, a professor in a culinary school, writer and a judge in several national cooking TV competiotions. He recently returned from Sweden, where he apprenticed for 3 months at the renowned Frantzen restaurant (3 * Michelin, no 21 in the world rankings).

Dimitris Dimitriadis is one of most renowned Top Chefs in Greece. Born and raised in Larissa, he trained to become a Chef at the Hotel Management & Culinary School of Rhodos. After his traineeships, Dimitris worked as Head Chef in a various of star honored restaurants and hotels in Greece and abroad. The chef is responsible for the Bar-Restaurant Artisanal since 2015. His career choice was heavily influenced by his grandparents and their farm and from a young age he knew he wanted to become a chef.

Kafeneion “Adeste”
Enter the world of the traditional Cretan kafeneio and enjoy a plate of local mezze, raki or ouzo, or strong... 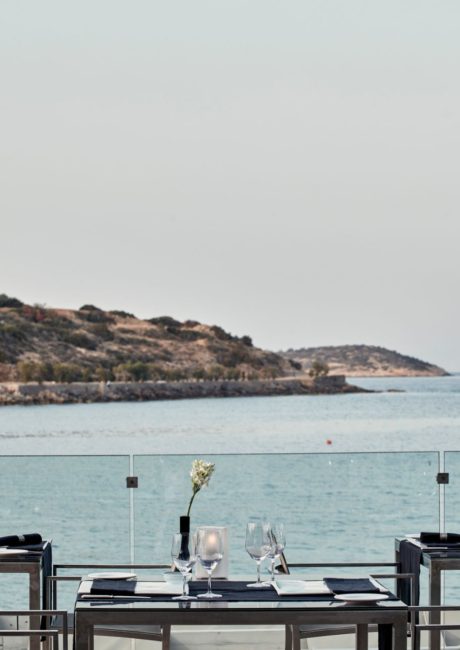 ‘La Bouillabaisse’ Restaurant
Lovers of fine dining and exceptional wines will be glad to spend an evening at the prestigious La Bouillabaisse Mediterranean...
© Copyright 2022 Minos Beach Bluegr Hotels & Resorts All Rights Reserved | Web Design & Development by .LifeThink
Back To Top
×